It is a mistake to believe the hardness levels in your water don’t change. Hardness levels change all the time. It’s not uncommon for actual hardness to be 1/2 to 2 times the hardness level programmed into your salt softener. Take for instance the city of Brentwood, CA.; according to their 2015 Annual Water Quality Report hardness ranged from 14 to 27 grains per gallon.

Cities change water sources to deal with changing flows in their surface water sources – rivers and lakes. In the summer and fall months when river flows and lake levels are low cities switch to ground water pumped from wells. Ground water usually has higher hardness levels than surface water. Consequently the hardness levels in your water change when water supplies change.

How is changing hardness levels a problem?

Some manufacturers use a “safety factor” in the salt softener program. Essentially, the safety factor sets aside a portion of the softener’s capacity for changes in water hardness levels and usage. A proper safety factor reduces the risk of untreated hard water. The safety factor also increases wasted salt, water and money no matter the hardness level. The best you can do is measure the hardness and change the salt softener program on a regular basis. Salt based softeners are rarely able to perform perfectly. They are either wasting salt, water and money or passing hard water.

What options do I have for variable water hardness?

Now consider Cascadian PolyHalt® saltless water softeners; They soften water much differently than salt based softeners. PolyHalt® forms an ion bond with hardness minerals and softens the water by preventing the minerals from causing problems. Also, PolyHalt® water softeners automatically adjust to changing hardness levels, no programming involved.  Because PolyHalt® adjusts automatically to hardness levels there is no waste and no untreated water to cause problems. As a result you continuously have perfectly soft water to every tap in your home regardless of changes in water hardness. 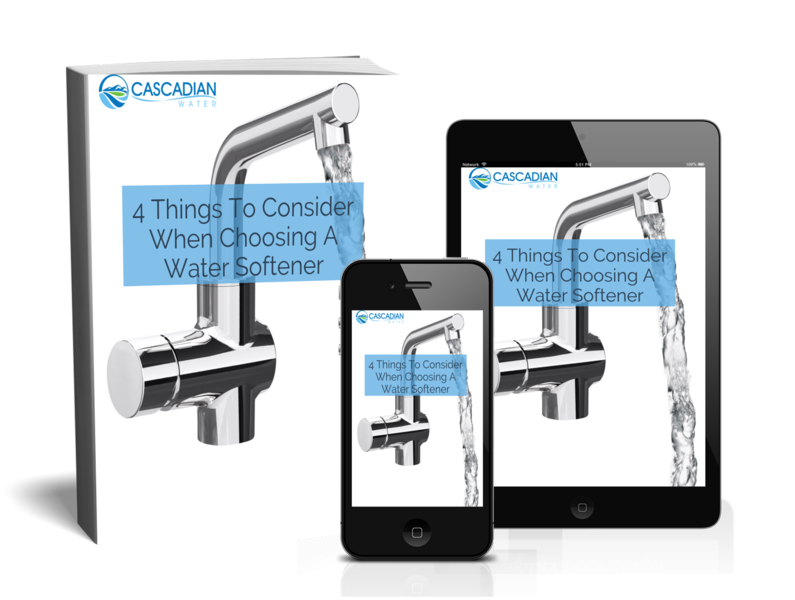 4 Things To Consider When Choosing A Water Softener

You have had it! You have finally decided to do something about the awful tasting water in your home, but with so many options to choose from, it is really overwhelming. It can be hard to know which solution is right for your home or business. In this free guide, we will share the 4 most important things you need to know before you purchase a water softening system.

Thank you for requesting your free guide. It should be in your inbox shortly. If you don't see it soon, check your junk or promotions folder.

We hate spam as much as you do, so we never share your information with anyone.